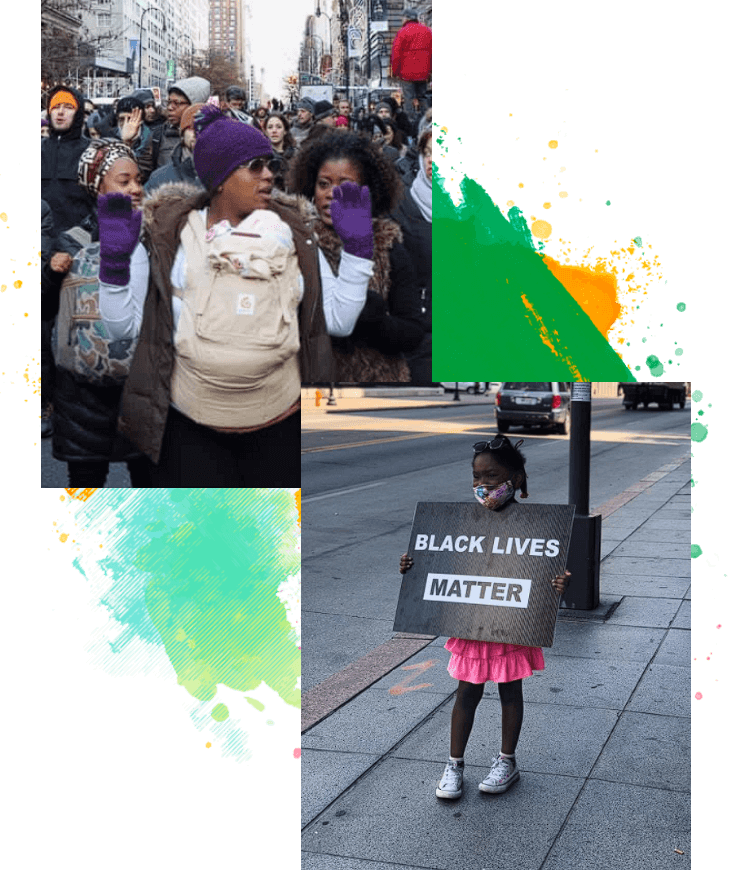 The art of protest is not new to Jamille and Jebel, founders of Pint Size Protesters. It began in 2014, when Jamille, Jebel, and Zuli (who was just 10 weeks old at the time), took to the streets of New York City to protest the murders of Mike Brown, LaQuan McDonald, and Eric Garner who all died at the hands of police in 2014.

Fast forward to the 2020 murder of George Floyd when Jamille, Jebel, and Zuli, who was now 6 years old, took to the streets again in Columbus OH, where they now call home. This time even more enraged that 6 years later, they were still fighting the very same fight for justice.

While Jamille and Jebel felt safe protesting with their child in downtown Columbus, OH, the city’s hub for all protest activity, they recognized that many families may not feel the same safety, but were equally enraged and looking for a way to get involved. Thus Pint Size Protesters was born! What began as a small “what if” idea in Jamille’s mind has grown into an online community of over 400 families with varying backgrounds, from all parts of the Columbus metro area (and beyond!) sharing ideas and resources about engaging kids in anti-racism and activism.

Columbus, Ohio, police have killed the third-highest number of children in the United States since 2013.
Source: Newsweek

The median household income for Black households is $35,569, which is 40% less than that of white households.
Source: WOSU Public Media

The median household income for Black households is $35,569, which is 40% less than that of white households.
Source: WOSU Public Media

Black Unhoused Community of Columbus  vs. the Total Population

70% of the unhoused community are Black, but only nearly 30% of the city’s population is Black.
Source: Columbus Coalition Against Racism and Homelessness

We believe that Black Lives Matter and our mission is to give kids and families a safe space in the movement through our 3 pillars:

Call for change in our community through targeted actions to influence policy and hold our leaders accountable.

Pint Size Protesters is committed to raising anti-racist children and educating the next generation of social justice warriors.
Donate

Join Pint Size Protesters as we honor and uplift Ma'Khia Bryant who easily could have been one of us.

Join PSP as we learn what being "houseless" or "unhoused" means and the direct connection to racism - and help us make compassion kits!

Our Voices in Action: How kids can influence our leaders to advance justice

A practical session on how kids and families can influence our local and state elected officials to fight for racial justice and equity.

Pint Size Protesters is teaming up with State Rep. Mary Lightbody (D-Westerville) to hold a family-friendly half-day of learning and action with our state elected officials. We will gather safely in-person at the Riffe Center and then proceed to the...